…and all of them were white and male, and middle class and middle-aged, and 'academic' if you want to add those to the charge sheet.

But this was the annual one-day conference of the Critical Psychiatry Network – a mainly UK-based online group of several hundred psychiatrists. It is held in the School of Sociology and Social Policy at Nottingham University – and a few dozen of the members make it to the conference; this year’s title was ‘Recovery in a Time of Austerity’. And that is indeed what we talked about – although a couple of programme changes needed to be made: Tim Kendal, our Grand Vizier of English Mental Health, had to cancel because of the civil service ‘purdah’ now an election has been called. Just like the clean air act going through parliament. Julie Repper, leading light of the national recovery college razzamatazz, was replaced by an even bigger cheese in the world of ImROC, Mike Shepherd, now retired from his role there. But a good time was had by all – even if the speakers did end up all being white male psychologists. Three kings bearing gifts, maybe. 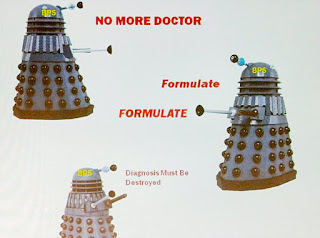 In which case the first on, Dave Harper from UEL, was the King of the land of rational discourse. He spoke softly and with authority on his subject of ‘Responding to the challenges of austerity, recovery and neoliberalism’ – weaving a web of facts that made it hard to disagree that inequality is the pump that we need to take the handle off. But his critique included subtler points, such as the likely psychological impacts of inequality (from the ‘Psychologists for Social Change’ group) and authentic ‘recovery’ being in danger of being only understood in an individual context and dyadic conversations – and missing the whole ‘the personal is the political’ point. All good stuff: no nonsense, but no fireworks. I particularly liked his BPS daleks screaming ‘formulate’ rather than ‘exterminate’ (ref RitB) though I was a bit troubled by his black polo sweater. It gave me flashbacks to the same kit as worn by Davros, as we used to call the architect of IAPT and all the ghastliness that has followed it. See other blogs for more details… 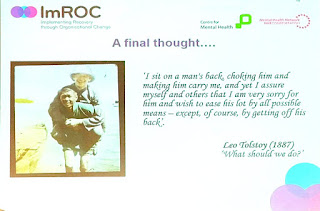 Next was the King of Recovery Colleges, or at least ImROC – Geoff Shepherd. He gave his talk with the air and authority of a big beast on a day off (although he explained to us that he now has every day off, at least insomuch as that he is retired from his previous commanding role). But he gave a fishy history of ‘recovery’, and he told us it was going to be fishy – because there are so many invisible and inaccessible fish in the sea of facts that incompleteness was inevitable. He did start by going back to The Retreat – but with only scant reference to therapeutic communities, which have been espousing, disseminating and celebrating the same ideas for centuries, not just a few years. Although his delivery was a bit like that of a tired expert, he did have a cracking analogy for the end – which really nailed the problem for me better than his generous welter of words: the poor troubled man, who is carrying us, is exhausted and clapped out despite us doing all we can to help him. Except, that is to get off his back. Geoff really does believe in the stuff – even though he’s clearly an expert.

After lunch, the finale from the King of Recovery Evidence – Mike Slade, the home candidate from Nottingham’s Institute of Mental Health, talking about ‘Recovery – commandeered but rescuable?’. He wasn’t quite political enough to call it ‘colonised’ – and he was keener on lists and declarations of new paradigms, than he was on any deeper analysis of how that commandeering is linked to something bigger, smellier and more rotten than his neatly constructed powerpoints could show. one interesting proposal he made was to pay doubly-qualified clinicians more - those who have lived experience, as well as a professional qualification. And he muttered something like 'you just wait and see' under his breath when a few of the audience didn't quite believe him. But to be fair, I think he had the most fire in his belly of the three – perhaps through youthful exuberance (well, compared to some of us) in the role of a globetrotting messiah of recovery. I suppose what unnerved me is how slavishly he adhered to the hierarchy of evidence in his arguments and conclusions – and although they did seem watertight by the positivistic standards we have all been encouraged to worship, only one type of evidence was worth even considering. I have seen that in other people with fire in their bellies, in the PD world, and it’s not always a Good Thing.

Overall, I felt a bit less at home there than at similar sized and similar format conferences in the therapeutic community, personality disorder and greencare worlds. It is as if those other areas are not just critical of mainstream practice, but are actually doing something different. A different sense of informality, openness and responsibility? Maybe that’s just a problem for psychiatrists – and we need psychologists to tell us.

“Greencare is a holistic and economically viable alternative to treatment with medication and hospitalisation. Sustainability is about connecting people to each other and to nature, helping people to see that there is a life worth living, and on a planet that is worth living on.”